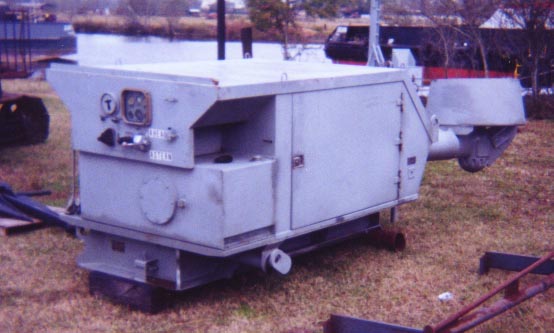 > Two identical units except that one is used/rebuilt and the other is new. The used /rebuilt unit does not have engine covers yet. Both have the following details:

> Skid mounted, diesel powered, 360º steerable propulsion unit with tiltable outboard type foot. Power transmission is through a hydraulic clutch and then a belt drive to the stern drive and propeller. Currently set up for raw water heat exchange cooling system.

> PROPELLERS: 42”x39.55”, 3-blade, Manganese Bronze The propeller is housed inside a nozzle similar to a Kortz Nozzle.

> DECK-TO-WATERLINE: Distance from the bottom of skid to top of nozzle that houses the propeller is approximately 4’ (This would be the maximum height above the water that the bottom of the skid could be placed and still have the propeller/nozzle unit completely submerged.)

> HYDRAULIC OIL: 25 gal / built-in (Same tank as the fuel but a separate compartment that is created by a bulkhead inside the tank.)