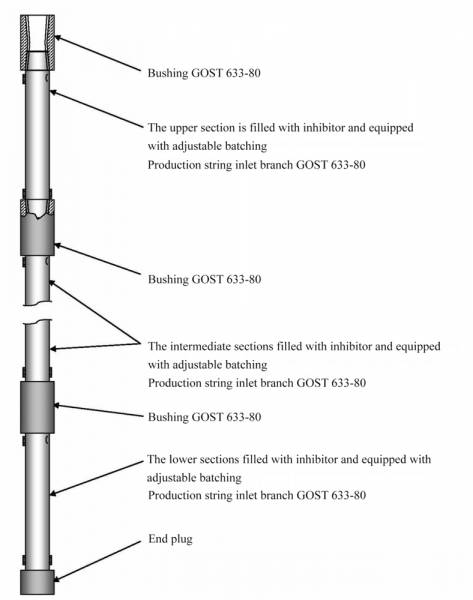 LLC “L-Reagent” is a Russian scientific production company and founders of LLC “L-Reagent” are the authors of six patents in the field of oil production.
The containers “Tril®” are designed to prevent the emergence of salting inhibitors, asphalt, resin, paraffin deposits, emulsions and corrosion on the equipment during the mine development process.
Tril® container with inhibitor of salt deposits is installed into the pumping unit just before its descent into the well during regular current workover rig and workover operations. The extracted liquid undergoes the inhibitor, which is installed in the container. The “Tril®” inhibitor does not enter into chemical reactions with the produced fluid. The action of the inhibitor is limited to enveloping salts in the produced oil and creating a protective film on the surface of the deep-well pumping unit. The enveloping (protective) film prevents deposition, coalescence and formation of large conglomerates of sediment particles. Thus, the salt particles are removed by the produced liquid in form of suspension. “Tril®” inhibitor works throughout the entire process of oil production.